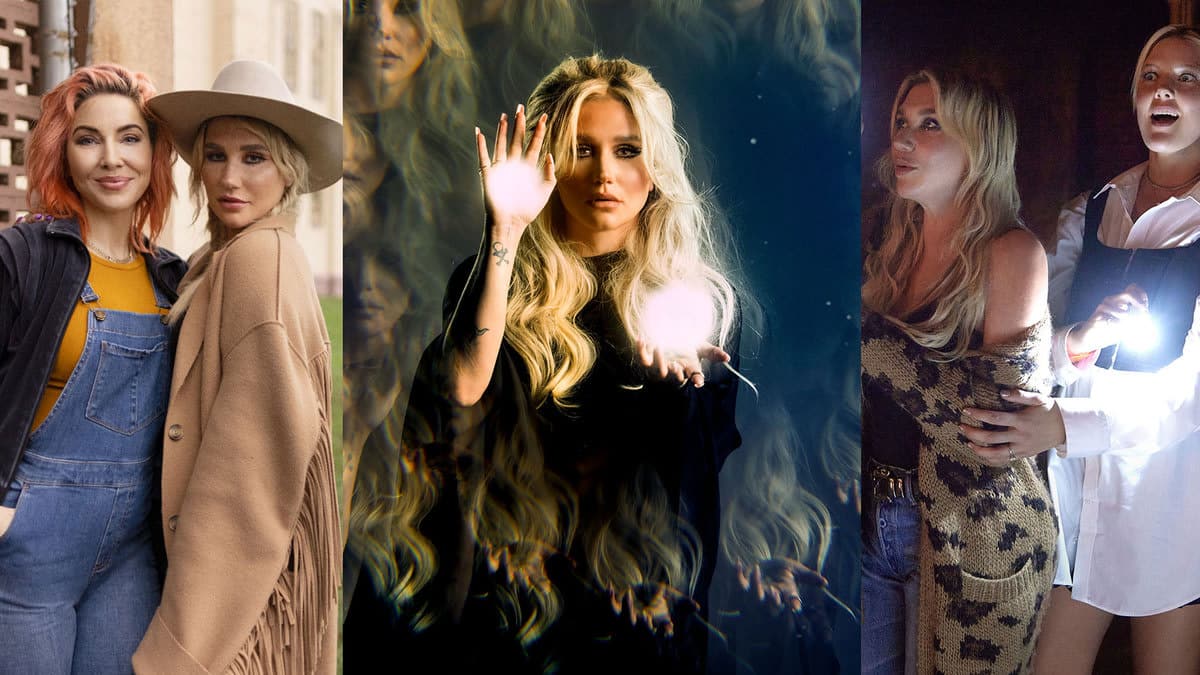 The new series “Conjuring Kesha” sees the hilarious pop star getting scared out of her wits by paranormal activity. It is perfect content.

You can’t swing a platinum record in America without smacking it right into something haunted.

A country built on as much abominable turmoil and trauma as the United States is bound to be the sort of place where spirits roam, angry and refusing to move on to the afterlife. But has anyone considered that maybe all these trapped spirits really need is a good self-empowerment anthem? Maybe a night at the club? I would also walk the Earth unhappily for the rest of eternity if I had never heard the triumphant call to the dance floor that is, “Don’t stop, make it pop, DJ blow my speakers up.”

There are no wild dance parties with the undead in Conjuring Kesha, the new paranormal investigation show from Discovery+ which stars the titular chart-topping singer Kesha Sebert and premieres July 8. But who could be better to approach the world of the inexplicable than the woman who wrote a song titled “Supernatural” about a purported tryst she once had with a ghost?

That’s really the whole conceit of Conjuring Kesha: Kesha loves to flirt with the supernatural, so why not give her a camera crew and film what happens when she enters some of the most haunted locations in America, armed with nothing but some liquid eyeliner, a camcorder, and a few celebrity friends? Whoever greenlit this deserves a Nobel Peace Prize.

Each episode of Conjuring Kesha opens like an old-school episode of Are You Afraid of the Dark?, with glimpses of creepy iconography spliced over a dramatic voiceover that brings us into Kesha’s world. It’s extremely hokey and yet incredibly charming in its silliness. “Greetings, earthlings, Kesha here,” she says while an empty rocking chair moves back and forth and the hands of a clock spin round. “When I’m not on stage, I’m exploring my connection to the supernatural. This is my twisted journey into the heart of darkness.”

Immediately, I’m buying what Conjuring Kesha is selling me. Say no more. I’m ready to follow the woman who wrote “We R Who We R” into the infernos of hell

In the series premiere, Kesha and comedian Whitney Cummings travel to Brushy Mountain State Penitentiary (nicknamed “Bloody Brushy”), one of the most haunted prisons in the United States. “The prison itself was actually built by the prisoners, in the shape of an upside-down crucifix,” Kesha tells us. “Like a bad omen.” It was here that I realized just how willing I was to be gullible about everything in Conjuring Kesha. Really, the prison is just in the shape of a cross—whether it’s upside down or right side up just depends on which way the person shooting B-roll flies the drone overhead. Still, I went, “Oooohhhh…”

But it doesn’t take much to believe that Bloody Brushy is a sinister place. It’s worn-down and dark, with chipped paint and broken glass everywhere. It genuinely looks haunted, and whether those superficial aesthetics are features created for the lucrative paranormal tours that the general public can book is not for me to debate. Too much arrogant speculation when facing off with the supernatural is a surefire way to get yourself in trouble, so I instead choose to lead with believing rather than inadvertently make myself the subject of the next film in The Conjuring universe.

Kesha is the same way, and that’s why she’s the perfect tour guide for this kind of show. She approaches the haunted locales with a healthy sense of caution and respect for the process, and she’s open to making contact with whatever is present—as long as it isn’t a demon. Unfortunately for Kesha, it would seem that Bloody Brushy is rife with demonic energy.

Kesha and Whitney spend their second night at the prison exploring the areas with the most recorded paranormal happenings, which include the location of a reported possession and sightings of a spirit dubbed “The Creeper” who has a penchant for climbing up walls. The women react surprisingly calmly to this news, whereas I would simply take a running dive out a second-story window.

In order to ensure the safety of their mortal souls, the pair team up with a Catholic demonologist, who monitors their interactions with spirits. As the night gets darker, Kesha and Whitney split up—a fool’s errand already!—to explore different parts of the prison.

Throughout the evening, they make repeated contact with different entities, as indicated by the swaying of a bell they’ve hung, the alarm of a REM pod (which detects an electromagnetic interference by a presence within six inches), and an SLS camera (which detects humanoid objects and maps them differently than actual humans on the camera).

During the investigation, Cummings’ naive foolishness is a delight. Walking into the room where the possession took place, she greets a spirit by asking, “Do you know who I am?” Unfortunately for Cummings, I’m guessing Bloody Brushy wasn’t showing a lot of Chelsea Lately on the prison television prior to its closing.

Cummings ultimately gets deceived by the spirit when she can’t get a firm answer about its gender, leading her to ask, “Are you a transgender woman?” The spirit indicates a firm yes by triggering the REM pod, causing Cummings to start apologizing to the spirit for their experience in the prison. She’s quickly pulled out by the demonologist, who tells her that she was likely being lulled into a false sense of security by a malevolent force that wanted to get close to her by finding a point of weakness. It’s incredibly chilling, and yet absolutely hilarious at the same time.

Though Kesha and Whitney are both game for the investigation, Kesha’s reluctance to risk possession ends the night early. (Understandable.)It does make for a slightly irritating viewing experience, though, as we dip out of Bloody Brushy just as things are starting to get intense. But who am I to argue with another person’s sense of self-preservation, especially someone who has already been through so much?

Kesha’s constitution is much stronger in the series’ second episode, where she travels to Tennessee’s oldest surviving opera house, Antoinette Hall, alongside indie pop sensation Betty Who, coming out of hiding for a rare appearance outside of Pride season.

“Has anyone had a particularly negative experience in the building?” Betty Who asks a group of nine witnesses to The Antoinette’s relentless haunting. When nine hands immediately go up, Kesha and Betty Who are simply left to say, “Oh…OK!” and exchange a fearful glance while they brace themselves for what’s coming.

Later, in a scene that sent chills down my spine, the pair set up a box that can convert those ghostly frequencies back into patterns of human speech. I won’t spoil all of the terrifying fun, but if I ever heard a spirit say anything like Kesha hears through that ghost box, I’d bolt for the hills and leave my friend behind without a second glance.

That’s part of what makes Conjuring Kesha such a fun ride: Kesha is unequivocally down for a good scare, and even in moments of hesitation, she forges forward with a curiosity to understand the unknown. These themes have always been present in her music, from early explorations of the fragility of life to more recent ruminations on the steadfastness of the human spirit—and of course, she’s never shied away from getting a little ghoulish with songs about cannibalism and past lives.

Future episodes of Conjuring Kesha will find Kesha hunting for Bigfoot with Bachelorette star Jojo Fletcher, infiltrating a haunted secret society lodge with supermodel Karen Elson, and stepping into an infamously cursed asylum with Queen of Bounce and Beyoncé feature player Big Freedia. All of Kesha’s co-stars are as eclectic and exciting as her, and they’re really what makes Conjuring Kesha so much damn fun.

The show feels like getting together with your friends to do something spooky and maybe a little dumb on a crisp autumnal night, pulling out the ouija board at a party just to scare yourselves. It’s something I would never partake in because, well, I know better than to play with the spirit realm like that, but watching other people swallow their fears and step into these situations in this scrappy little show was some of the most fun I’ve had with television all year.